Around the Turner Prize. Belfast and Derry in the Spotlight

What surprises the most, spending a little time in Northern Ireland, is the incredible amount of stimuli you’re subjected to.
Coming from a country like Italy and a city like Rome, where decadence – with its incredible beauty and peril – dominates the quotidian, it’s inevitable that you feel shaken by the climate of continuous tension that you breathe in this particular North. The conflict that you feel in the air, combined with the cultural differences, render your stay constantly charged with expectations, ones that are never disappointed.
If it’s difficult to understand Northern Irish history, politics and society, at the same time you become aware straight away that our gaze from outside, though more objective, can never comprehend the full combination, precisely because it all seems extremely fragmentary. Even simply getting around a city like Belfast must involve the awareness of obstacles, whether the Peace Lines that divide the Protestant and the Catholic areas, the strange ‘dead’ zones or one of the many compact districts that seem like little ‘uncrossable’ areas. You can’t arrive with the Mittel-European presumption of taking shortcuts or using maps.
So it’s necessary to proceed with humility and caution, applying different rules from those you’re used to. In this way listening becomes sincere, and surprise gives way to the understanding that here, to go on, the only real way is to continue with confidence, head high, calmly, often on your own.
The contemporary Northern Irish art scene goes on in the same way. It’s incredibly vibrant and unique. A genuine market for contemporary art still doesn’t exist, so since the Eighties the artists have been their own promoters through the organization of an incredible number of exhibition projects prevalently aimed at promoting Northern Irish art at local, national and international levels and bringing artists of international fame to Belfast to get to know the city, creating the basis for intercultural exchanges.
It’s in this climate that the prestigious Turner Prize is arriving for the first time in Northern Ireland.

It has happened before that the prize was hosted not in its usual London setting of the Tate Britain but in other U.K. museums. The first time occurred in 2007 at the Tate Liverpool to inaugurate the city’s year as European capital of culture 2008. The second was in 2011, at the Baltic Museum in Gateshead in the north of England.
This year the prize is mooring in Northern Ireland and specifically in Derry, the city of Bloody Sunday, in this extreme North that borders on the Republic of Ireland and so with the South.
The occasion is Derry’s designation as U.K. city of culture 2013, with the consequent investment of capital and energy that sees it at the centre of numerous cultural initiatives. The Turner Prize exhibition, opened just a couple of days after the closure of Frieze, is hosted in one of the ex-military buildings of Ebrington (a site with strong historical and political resonances), in front of the new, iconic Peace Bridge (which has become the city’s logo in this fervid year of 2013), a pedestrian bridge that links the (unionist) Waterside to the (nationalist) Cityside. The finalists of this year’s Turner Prize are Laure Prouvost with the installation Wantee of 2013, Tino Sehgal with the 2003 performance This Is Exchange, David Shrigley with Life Model (2012) and Lynette Yiadom-Boakye with a series of recent oil paintings. The winner will be declared on December 2nd 2013. The exhibition is curated by the directors of the Centre for Contemporary Art (CCA), Aileen Burns and Johan Lundh, and by the curator and manager of Void Art Centre, Maolíosa Boyle.
CCA and Void are the city’s two exhibition spaces, naturally at the centre of numerous projects during the frenetic year of culture. To these two the City Factory Gallery is added temporarily, in the same building where Void is based. At the City Factory till the 4th January 2014 it’s possible to see a retrospective show of Willie Doherthy’s entitled Unseen, which brings the photo and video works back together, starting from the historical and renowned photos of the mid-Eighties in black and white and ending with the most recent work that reflects on Derry’s recent changes. 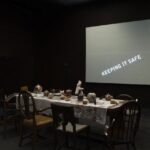 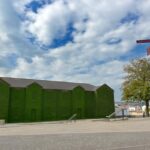 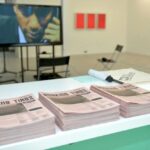 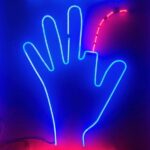 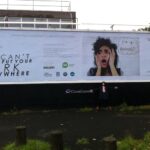 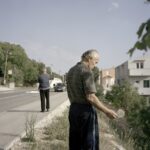 Void was founded in 2005 as a non-profit space, self-managed by the artists (on the model of the exhibition spaces of nearby Belfast) and is occupied particularly with bringing internationally famous artists to Derry. When the Turner Prize opens, Void will be hosting a solo show by Mark Wallinger and, at a later stage, another one by Santiago Sierra. Among the site-specific projects promoted by Void, one worth mentioning is the cycle Artists’ Gardens curated by Gregory McCartney, which in its second instalment has as protagonist one of the buildings of Ebrington, the Cunnigham, whose walls the duo Ackroyd and Harvey have covered with grass grown naturally using a compost of seeded clay. Another project, curated by Declan Sheehan and Ed Baxter, is set to bring to Derry the well-known London radio station Resonance FM, to broadcast a packed schedule involving international artists for a month from a mobile performance space.
Centre for Contemporary Art (CCA) takes its inspiration from the previous Context Gallery, founded in 1992 by Hugh Mulholland (today curator of the MAC in Belfast) with the intent to promote both young local artists and international names. The occasion for the collective show Momentous Times, curated by Aileen Burns and Johan Lundh, is the centenary of the Dublin Lock-out, the culmination of a series of strikes by Irish workers focused around the right to unionize. The project is intended as a reflection on working conditions in three historical moments – 1913, 2013 and 2113 – and on how the theme is represented by art through an exhibition that is to include ten participating artists, forums, screenings, a publication and the newspaper Working Times, edited by the curators together with Helen Carey and produced in collaboration with various Irish and Northern Irish institutions, where the newspaper is also to be distributed.
Lastly, until December 15th 2013, in the space of Ebrington, every Saturday and Sunday it will be possible to the work Borderline Project by the Japanese artist Shiro Masuyama, a caravan whose interior is divided in two symmetrically, one half of a British design, the other half Irish in design.
Masuyama has been living in Belfast for some years and is currently on the board of the city’s Flax Art Studios which in 2014 will celebrate the 25th anniversary of its founding in 1989 by a group of artists looking for working spaces. The studios are supported by the Arts Council of Northern Ireland and by Belfast City Council, like the city’s many organizations. Previously, in 1984, out of the same needs for studio spaces, Queen Street Studios came into being and Catalyst Arts, in ’93, took inspiration from the model of these spaces self-managed by artists, with the goal of promoting local art at national and international levels. Catalyst Arts, which this year reaches two decades since its founding, is characterized by an extremely collegial spirit. Its managing board is in continuous rotation and every year includes a good ten or so directors who stay in the role for up to two years.

Among its directors Catalyst Arts numbers Phil Collins and Susan Phillipsz. During the month that will see the Turner Prize open, two shows are to start at Catalyst, first A Subtle Matter and then Forces, while another historic Belfast exhibition space, the Golden Thread Gallery (founded in 1998) hosts a show celebrating Catalyst’s twenty years in existence, as the tenth installment of a cycle entitled Collective Histories of Northern Irish Art. The show, curated by Chérie Driver, an ex-director of Catalyst and currently responsible for its archive, perfectly reflects the collegial and collaborative spirit of the space. Without presuming to give a precise portrait and with the awareness that Catalyst is a space in continuous development, the curator has worked in close contact with the artists and in many cases the works have been remade, either because they were no longer extant or to adapt them to the exhibition space. What results is certainly the extreme vitality and the collaborative spirit that characterizes not only Catalyst but the various spaces currently active in Belfast. The Golden Thread Gallery is also about to open, in the Project Space, a solo show by Helena Hamilton, following the show by Colin Clarke in which the artist used the gallery as a studio to make a series of ephemeral pieces or public monuments in different strategic points of the city. Another off-site initiative of the Golden Thread is Sarah Maple’s project You Can’t Just Put Your Work Everywhere, curated by the young Ben Crothes and characterized by a series of six advertising posters scattered through the city with a selection of the artist’s provocative and ironic self-portraits.
As for the city’s museums, the Ulster Museum is to host a retrospective show by William Scott for the cententary of his birth and a show by the young Martin Boyle, Genuine Replica, at the conclusion of his Ulster Museum Residency, while the MAC (Metropolitan Arts Centre) has opened The Mystery of Tears with works by Jesper Just, Marco Anelli, Salla Tykkä, Sophie Calle, Bill Viola and Bas Jan Ader.
To conclude this short journey through the best exhibitions to see between Derry and Belfast around the time of the Turner Prize, one which can’t go unmentioned is the three-year photographic project by Dragana Jurisic, YU: The Lost Country, at Belfast Exposed until December 21st 2013. The object of inquiry of the artist, born in Yugoslavia but resident in Dublin, is the book of the journey through Yugoslavia made by the Anglo-Irish writer Rebecca West in 1937, Black Lamb and Grey Falcon (1941). The artist retraces the stages of West’s journey, superimposing on them her own experience of the places in memoir-like form, creating photo-portraits with strong emotional impact.