Objects and Sounds was the first the first solo show in Italy of the Finnish artist Jonna Kina, hosted by Fondazione Pastificio Cerere and curated by Manuela Pacella.
The project has received the patronage of the Finnish Embassy in Rome and has been made possible thanks to Project Grant 2019 by Frame Contemporary Art Finland and the support of Finnish Cultural Foundation and Arts Promotion Centre Finland.

Jonna Kina’s works often lies at the junction of sound, language and image. She works mainly with film, installation, sound and photography.

The first level of iconographic representation in the artist’s works has a powerful stylistic, elegant, and clean distinctive trait. This thin, almost surreal coat is ready to gradually show the stripped, naked content during the necessary time it takes to fully appreciate the artwork, so as to then make it recognizable through a rapport of cognitive and mnemonic intimacy with the spectator.

The main core of the exhibition is Arr. for a Scene, a short film shot in 35mm, whose protagonists are part of an artistic category that has been operating secretly for over a century, to make it so that our perception of the cinematographic reality is as accurate as possible, they are the Foley artists, in honour of the American Jack Foley, pioneer of the cinema sound effects. The objects used by the Foley artists, often absurd and completely different from the sound they reproduce (for example inflated balloons can be used to emulate the cooing of pigeons), are the subject of photographs taken by Kina, dated 2013, Foley Objects, a collection of which is present in the exhibition.

These objects, framed each the same way, with an homogeneous light and on a white background, are paired with short captions which, in a subversion of language more modern than Magritte’s very own, refer to their sound which, inside the silence of that photographic portrait, stirs in all of us not only feelings of surprise and excitement, but a sound imagined and heard in our mind.

Our attention towards this sound, a real sound in Arr. for a Scene, is initially distracted by the observation of the two artists executing it with peculiar and unexpected utensils. The couple looks forward, towards the spectator, but the gaze is directed elsewhere, because they are meticulously reproducing live the sounds of the movie that has been commissioned to them and which is ideally in front of them. The uneasiness felt towards their “absent” gaze is lost when our memory, in this case collective because cinematographic, recognizes the particular scene that they are watching, namely the renowned shower assassination scene in Hitchcock’s Psycho.

That sound is the undisputed protagonist of the exhibition – loud, silent, and statuesque – is also deduced by the triptych Score of Arr. for a Scene (2017) in which Kina, with the guidance of the composer Lauri Supponen, has given a visual shape on paper to those same sounds created by the protagonists of the movie. The final outcome draws attention to both the notation systems used in the baroque dance and the graphical and visual experimentations by Cornelius Cardew in his Treatise (1963-1967), confirming Kina’s interest in knowing how to properly reutilize the roots of a certain experimentation in the visual and musical fields giving everyone the chance of being able to recreate it, although inside the silence of our own mind. 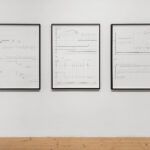 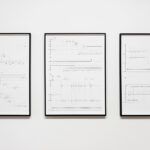 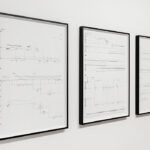 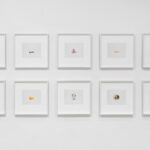 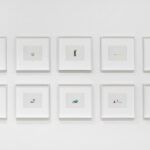 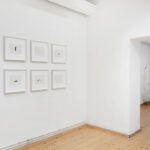 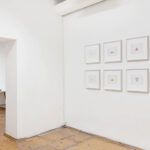 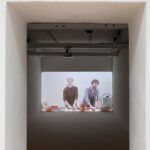 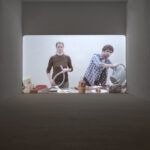 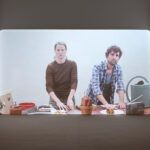 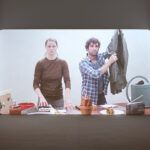 The Image of Sound

In a fashion similar to the conventions of modern cartoonists, abstract symbols such as circles, zigzag lines and starbursts may be the result of attempts to represent the sounds themselves.
Steven J. Waller [1]

Before the introduction, during the IX century, of the modern musical notation, the graphic evidence concerning music depicts mainly representations of musicians or musical performances as we see occur, for example, in the Egyptian tomb paintings of the second millennium. There are, moreover, riveting testimonies found in Mesoamerican land of ideograms representing singing, speeches, or even sound effects such as echoes inside architectural spaces. In a similar manner it has now been proven that both the subjects and the geographical location of the rocky paintings follow the same criterion, that is the one of the acoustics of the place where they are performed. The musical phenomena were reported through pictorial representations picturing the particular sound that a certain portion of stone emitted, attributing it animistic properties.[2]

The evolution of music doesn’t follow a linear nor progressive development but is characterized by an alternating cadence of steps forward and back: “In Western classical music, for example, composers such as Cage and Devine have attempted to demonstrate methods of composition that are based on chance, not only in the process of composition but also in the performance.”[3] We are in the field of experimental music where it is worth mentioning Treatise by the English composer Cornelius Cardew, a score created between 1963 and 1967 and made up of 193 pages of lines, symbols, geometrical and abstract shapes, without any specific instructions to be followed by the musicians, that are left in a position of a complete and total interpretative freedom. John Cage and Cardew’s works, together with the baroque dance notations, are part of the source material that the Finnish visual artist Jonna Kina – class of 1984 – quotes as essential references for some of her works that focus on sound as its main field of investigation.

Fondazione Pastificio Cerere hosts the first solo show by Kina in Italy through an accurate selection of artworks representative of her modus operandi and the marked interest regarding the linguistic and evocative potential of sound and image – be they photographic or filmic – with direct references to the history of cinema and music.

The series Foley Objects dates back to 2013 and it is made up of 26 photographic portraits of just as many objects used by “the rumoristi” (the noisemen, as they are called here in Italy), or Foley artists, coming from the name of the pioneer of sound effects in both the radiophonic field and the first cinema with sound, Jack Donovan Foley (1891–­1967). Fascinated by the sundry tools used by the various Foley artists reached out by Kina, she decided to portray some of them in her studio. Photographed in an analytical manner, giving them the same space and illumination, they become almost catalographic specimens in a sort of “archive of the unknown.”[4] Each image is followed by a short caption, sometimes made up of a single word, explaining the use of sound of the specific object by the Foley artists. With this one simple textual addition the objects acquire a sort of humanity and the gaze of the spectator is led to a more attentive observation in catching a glimpse of the worn parts, in imagining their use and, most of all, in reproducing that particular sound ‘written’ in one’s own mind. In the silent admiration of an apparently mute photograph, a linguistic and perceptive short-circuit activates, often deriving from the ironic tone when, for example, under the image of the pineapple we read “Dinosaur skin” or when seeing some colored balloons become “Pigeons”.
The Foley artists have been playing, for over a century, the important role of making our cinematographic experience as convincing as possible, giving us the chance to losing ourselves inside the filmic narration. We rarely stop to think that it is only the dialogues that are recorded live, everything else is edited in post-production; it is pure simulation.

It is not by chance that such contradictions are highlighted by some contemporary artists. In a different manner than Kina, but with the same knowledge of the history of cinema and sound, the French Bertille Bak (Arras, 1983) makes videos where the sound carpet is probably the most characterizing element of her work; Bak accentuates it, makes it incredible and comical in situations oftentimes dramatic, in order to awaken a sort of awareness in us and make us see that what we are watching is not fiction but harsh reality.
Jonna Kina is just as interested in stimulating the perception of the viewer whose simple vision slowly mutates into an active participation and discovery of the linguistic complexity. In Arr. for a Scene (2017), a short film shot in 35 mm, we are initially absorbed by the seemingly ordinary actions of the couple of protagonists. Their precise performance and their gaze, carefully facing forward, much further than the spectator, slowly create in whoever’s watching an almost physical discomfort that fades in a specific moment, the one of the acknowledgement of the sound of a cinematographic scene belonging to the collective memory, namely the renowned shower assassination in Hitchcock’s Psycho (1960). At that point the enigma is revealed, the spectator’s body relaxes, the mental recognition takes place. The Foley artists’ actions, their objects, their concentration towards a screen invisible to us, reveal the true craft of the way they operate: a skill aimed towards the creation of a comforting reality, for it is artificial.

The sounds realized in Arr. for a Scene become themselves subjects of another work of art of the same year, Score of Arr. for a Scene, through which Kina manages to transform cinema to the language of music and composition. It is about a triptych of prints with the sheet music containing the structures and forms of sound achieved by the couple of Foley artists in the artist’s film. Kina, under guidance of the composer Lauri Supponen, has realized three musical scores that not only refer to the experimental composition, but also to a tradition as ancient as humanity itself, the one of striving to make music and sound effects visible, in this case a sequence of sounds realized with such instruments as a simple pen on paper.

The symbolic history of the representation, the imaginative power of sound, the artifact conceived as reality is all part of a semantic glaze, as they are slowly but as a whole stripped and laid bare thanks to linguistic and sensorial devices, as minuscule as they are acute. A simple written word activates sound associations in the ‘loud’ silence of our mind, a sequence of sounds demonstrates how many generations are aware of and how they belong to the same façade, silently accepted as a reality. Semantic glaze after another, we enter a less and less artificial field and at that point it is too late to go back to just a passive vision; exactly the way it happened in the Renaissance artworks when, including the symbology of certain representations, by this time having entered that field today defined as iconology, it was impossible to go back, if not due to an involuntary amnesia. Once the caption “This is not a pipe” had been added to the pictorial representation of the very pipe in La Trahison des images (1928-29), Magritte has not let anyone believe that the representation of what is real, as likely as it may be, would be reality itself. A mise-en-scène purposefully unconcealed or expedients able to activate multisensorial experiences, have the purpose of keeping us anchored in a more tangible territory, of which we are in dire need of.