Lost in Narration is a major exhibition at the MAC, guest curated by Manuela Pacella, that brings together several multi-layered projects across a range of media by Italian artists Riccardo Giacconi, Invernomuto and Luca Trevisani.

Each respective body of research brings these artists far from the relative comfort of Western Europe, with Giacconi considering cultural and historical resonances within the figure of the Colombian puppet, Espiritado; Invernomuto unpacking complex and unlikely histories and stories between Italy, Ethiopia, and Jamaica; and Trevisani working in a small town in Kenya with a group of researchers to study the fraught existence of Sudan, the world’s only male Northern White Rhinoceros.

These three projects have all been conceived in relation to little-known and marginal events, delving into vernacular languages, oral histories, and personal curiosities, where the artistic research processes employed perform incredible leaps across space and time to create new and unexpected forms of perception and meaning.

Presented as singular propositions filling the Sunken, Tall and Upper Galleries, this exhibition can nevertheless still be read as a unified whole that unexpectedly reveals itself as a complex, connected system across the building. Lost in Narration invites audiences to go somewhat adrift, to allow these artists to tentatively offer up unique new tales for us to step into and discover for ourselves.

Hugh Mulholland (Senior Curator, the MAC) commented: “We are very pleased to have Manuela Pacella as our guest curator for this major exhibition. Manuela is widely regarded throughout Europe for her curatorial practice, and this project she has curated presents visitors to the MAC with a complex and engaging series of interweaving narratives by a group of exciting young Italian artists who are quickly gaining international recognition for their work.”

Speaking about the exhibition Manuela Pacella explains: “For me, this exhibition highlights the importance of being able to lose one’s way in the pursuit of knowledge and meaning; ending up in unexpected places and spaces far away from any anticipated destination or end point. Investigations into the construction and deconstruction of narrative are prevalent in many artistic practices across the world today, and I’m honoured to be presenting the work of three significant Italian artists whose work grapples deftly with some of these complex questions and concerns. The MAC is the perfect venue for these ambitious works to unfold within, and I hope that visitors will happily lose themselves in fruitful thought and contemplation when moving through the spaces over the next few months.” 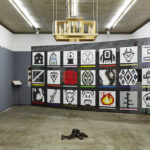 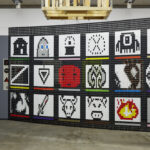 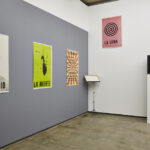 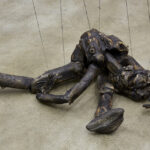 The Variational Status investigates the relationship between a range of narrative forms (puppetry, street storytellers, flyers and pamphlets) and a series of pre-political acts of revolt staged between Italy and South America, evoking a narrative constellation between animation, suggestion, revolt and orality, questioning the status of certain documents which may exist solely in the form of variations.

The artist developed further the topic by putting together two episodes of amnesia, one Colombian and one Italian: the character of the marionette espiritado which appears in the Columbian puppet show between 1920 and 1950 and Augusto Masetti who, in 1911 in Bologna, shot his superior.

The espiritado seems to have been inspired by a real episode during a street festival in a Colombian village when a man killed a police officer and for the rest of his life claimed not to remember. This case of amnesia is put in confrontation with Augusto Masetti who also has declared that he had no memory of his action of 1911.

Conceived as the deconstruction of a puppet show, the installation is made up of many elements which the main ones are the following:
A marionette (constructed in collaboration with the historical Compagnia Marionettistica Carlo Colla & Figli) which performs an automatic choreography activated by a mechanism that pulls its strings. This series of movement reproduces hypnic myoclonia, that is, those involuntary twitches that occur as a person is just about to fall asleep.

A plastic curtain that serves both as a visual reference to the traditional backdrops used in puppetry and as a storyboard for the various episodes of the Colombian puppet show El Diablo en el pozo.

A series of posters about the Colombian puppet show El Diablo en el pozo, printed using a 19th-century letterpress machine in Cali, Colombia. El Diablo en el pozo was written between 1915 and 1930 and it is the only known puppet script written before 1950, involving the character of the espiridado, which the artist was able to retrive during his research. 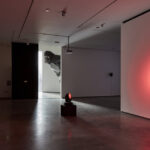 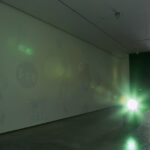 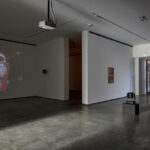 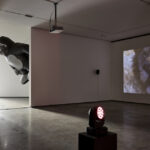 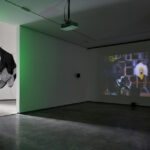 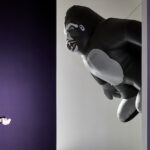 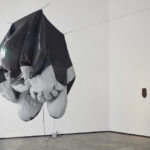 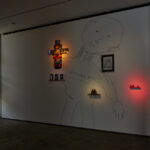 The complex narrative structure of Negus has its origins in 2011 and since then has taken different forms (sculptures, videos, drawings, performances, installations and long length film) and has led the artists to conduct research in Italy, Ethiopia and Jamaica.  From an episode passed down orally – which took place in the hometown of artists, Vernasca, in Italy – Invernomuto traces a path that connects local chronicle related to Haile Selassie I, last Negus of Ethiopia as well as the Messiah according to the Rastafarian cult. The episode around which Invernomuto started their research took place during the Fascist period. In the colonial era after the conquest of Abyssinia, effigies of Hailé Salassié I, were burned in the main square of Vernasca; the episode in Vernasca coincided with a soldier’s victorious return to the village from the colonial war. This path then opens, weaving a plethora of connections: religious (birth of Rastafarianism with Negus, Hailé Selassié I and the inevitable aversion towards him in Italy), music (the figure of Lee “Scratch” Perry as a pivot around which the work revolves, as a reggae shaman and early developer of dub) and historical (Ethiopian campaign).
The artists have not limited themselves to studying the subject, to following the various tracks and choosing, for example, video documentation as the most suitable medium. They are constantly finding new connections and have developed a complex network of works which are intertwined and from time to time “adaptable” to the place that host them. Their main objective has been to recreate the experience that they themselves have lived.

For the Tall Gallery of the MAC the artists have conceived an even more complex system of narration in which some of the crucial elements of the Negus constellation (like the video NEGUS – Lee “Scratch” Perry, 2013) overlap with past and future projects of Invernomuto: from the origin of the artists’ collaboration (such as the poster with the flame in one of their very first editorial project, the magazine ffwd_mag) to the ongoing Calendoola. In this latest project the focus is on the Ruatoria Troubles happened in Ruatoria, a small village in New Zealand where, between 1985 and 1990, a series of conflicts have taken place between the inhabitants of the village and a group of Maori who called themselves Dread. The narration of these episodes is written in the trilogy of books Ngati Dread written by Angus Gillies and gives ‘light’ to the overall installation through selected archival images printed on window transparencies for the windows of the three rooms of the gallery. 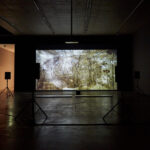 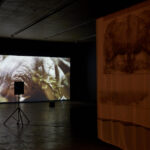 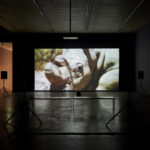 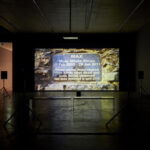 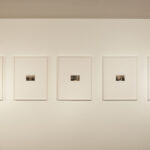 Sudan is the name of the last White Northern rhino which resides in the Ol Pejeta Conservancy, near Kanyuki, Kenya. Born in Sudan, forty years ago, the rhino was then brought to Prague, in Europe, where he lost the use of his agile forelegs, becoming unable to mount females. All other males of his sub-species have died, or been killed by poachers. Sudan was reported in Africa in the nineties, along with two other Northern white males, but they then died of natural causes. There are few females but Sudan has become impotent because of confinement in a freezing zoo that hindered the development of his forelegs and ability to push the imposing upward gesture needed to copulate and reproduce. His horn was then cut off as protection from poachers. Today Sudan is under guard, again in captivity, and with a human equivalent of 90 years, even an assisted fertilization is not easy to organize. Funds are currently being sought to enable fertilization into the uterus of a black rhino – in practice, a surrogate mother.
In February of 2016 Luca Trevisani organized a travel involving a curator, a photographer, a cameraman and a writer, to visit Sudan. The result of this expedition is a video and a series of polaroids “as unreproducible, unique and fragile as Sudan himself,” to use Luca Trevisani’s words.

More further he specifies his intents:
“Sudan represent an uncanny encounter, instead of telling his own story with a long documentary, or in the form of a tale, as an artist I think that a direct and poignant image will fulfill the task in a better, and more convincing way. The only small intervent, little staged action planned, is to put in relationship Sudan with two images portraying two groundbreaking meet between human beings and rhinos: the Albrecht Dürer’s well known woodcut representation of rhinoceros and Pietro Longhi’s painting depicting a tour of an exotic rhino to Europe courts in XVIII century. These two artworks cased european nature knowledge for more than two hundred years, being two the most influential animal pictures of all times. These two images from european art has been printed on big size cotton drapes and should be used as blankets for Sudan’s rest. Sudan is a project that discusses and studies the ‘nose’ of the sculpture and the monument today, where the monuments are made of stories and narratives more than of heavy bodies aging poorly.”

During the exhibition, the MAC, in partnership with British Council, organized the Second Curatorial Directions which took place from 22 – 28 May 2017, providing an opportunity for 7 emerging curators to engage in an intensive week of lectures, discussions, workshops and excursions examining certain key issues and ideas regarding contemporary curatorial practice.

Set within the context of Lost in Narration, the exhibition occupying the MAC’s galleries during this time, Curatorial Directions 2017 focused on the importance of text, narration, and story-telling in relation to exhibition making, considering new ways in which writing and publishing are contributing to curatorial discourse in the UK and Ireland, as well as in Italy, where the exhibiting artists in Lost in Narration all hail from.

This concentrated week of dialogue considered these topics in a participatory and collaborative manner, led by the MAC curatorial team and MAC guest curator Manuela Pacella and involved a dynamic roster of guest speakers and experts from various areas in the field of curating contemporary art. The faculty of speakers, facilitators and collaborators over the course of the programme included: Frederic Huska, Paper Visual Art Dublin, Response to a Request, Bookworks London, and Invernomuto, Gluck50, Humboldt Publishing, Careof and Marselleria Milan.

Download the PDF to know more about the week.