Marta Roberti
There Is an Elephant in the Room

There Is an Elephant in the Room is the title of the solo show of Marta Roberti, curated by Manuela Pacella and accompanied by a text of the philosopher Felice Cimatti. The exhibition took place at Spazio Molini, a space obtained from the recovery of the ancient Pastificio Cerere windmill.

Marta Roberti has chosen Rome as her base that she often left for long travels, mostly in Asia, since 2014. The drawing (mostly on carbon paper) is the medium Roberti favors and declines in installations and animated videos through which she explores the relationship between East and West, specifically how the Western forms its identity from what it feels being different: from animals to nature, to everything that’s considered different or “exotic”.

The Spazio Molini of the Fondazione Pastificio Cerere has fascinated the artist to such a degree to induce her to intervene with works and installations on paper as well as for the video animation which gives its name to the exhibition, There Is an Elephant in the Room (2013). The animal world, from the peacock to the elephant, vibrant with bright, subterranean life, follows a symbolic, almost totemic path where space itself, so heavily charged with industrial history and remains of war bombardments is a harbinger of questions sighing a more ample, existential breath.

Marta Roberti (1977, Brescia) lives in Rome. After obtaining a degree in philosophy in Verona, 2002, she studied Cinema and Video at the Brera Fine Arts Academy, obtaining a diploma in 2007. He works brought her to numerous exhibitions and festivals including: Visions in the Making, Italian Institute of Culture New Delhi (2020); Wall Eyes, Keynes Art Mile, Johannesburg and AuditoriumArte, Rome (2019); Something Else Biennal Off Cairo (2018); Portrait Portrait, Taipei Contemporary Art Center (2016); Scarabocchio, Kuandu Museum of Art Taipei (2014); Regeneration, MACRO, Roma (2012).

The exhibition was realized thanks to the support of Milan’s Office Project Room. 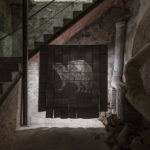 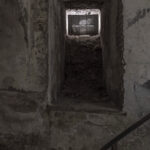 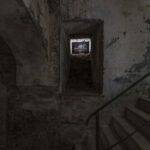 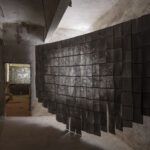 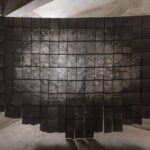 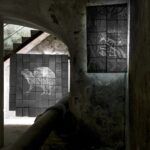 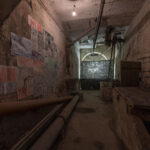 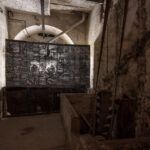 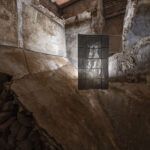 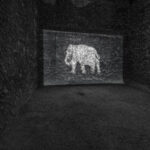 The Deconstructed Nature of Marta Roberti

The term polyptych – from the Greek poli (“many”) and ptychē (“fold”) – is a reference to those artworks made up of numerous elements which, when joined, become a unique work and it is mainly used for altarpieces dating back to the Middle Ages and the Renaissance. The main quality of the polyptych is its wide narrative availability which places the main subject in the center, while on the edges we find episodes of the Saint’s life whom the artwork is dedicated to. The polyptych is so closely associated to ancient altarpieces that not often is the term used when dealing with contemporary artworks. A sublime painting by the pre-futuristic Balla springs to mind, Galleria Borghese – Parco dei Daini, 1910, located in the National Gallery of Modern and Contemporary Art in Rome, as does a certain English art and, in particular, Gilbert and George who made of the dissection in multiple elements of a single great image the most recognizable traits of their work. The difference lies here, indeed: in contemporary times we find ourselves witnesses to a dissection into various parts of a single depiction as if the artists were guided by a compulsive desire to fragment it to then rearrange it in its disconnected or imperfect unity. Legacy or not of a pixelated vision of the world, it is certain that the process hands us a narrative availability that differs from the altarpieces, more intimate, relating to time, movement, relating to the marvel of seeing the starting image reassembled. The stupor lies in what is felt when faced with Marta Roberti (Brescia 1977)’s ‘polyptychs’; right there where nature (which is imbued with powerful tropical qualities in contemporary times) merges with, interpenetrates the human who, if represented as an isolated being (in a series of self-portraits done by the artist) is depicted doing poses imitating the animal, poses grazing the final breath. Much of her work is snapped, broken, told in fragments, to then rearrange itself into installations with a powerful, yet light and enwrapping character.

The frailty of Roberti’s work resides in a personal technique on a peculiar support. It’s the carbon paper or, more generally, carbonless paper normally utilized to replicate a number of copies of a written document. And here lies the connection between the great passion that Roberti has always had for writing and its apparent abandonment in favor of visual representation. In fact, looking closely, reading between the lines of the immense, insatiable drawing being the entire journey of Roberti, writing has today become a sculpture-like, physical presence. Her work being nothing but an open book towering over the world, written through a perpetual manual act, inside which the descriptive and immersive quality is comparable to a written work, of which the execution through time is determined by the active presence of the reader-observer.

In addition, if the carbon-paper might not appeal much to the younger generation, to ours – Marta’s and mine – is a direct allusion to writing, especially to the period slightly preceding the massive diffusion of computers. I was young, yes, but amidst my most vivid memories is the typewriter which I often saw being used by the secretaries whom I was left with by my parents, and which I admired not just for their typing speed, but mostly for the use of that ‘magic veil’ put between the sheets of paper which replicated copies upon copies of that first, original, text typed with such speed and mastery.

To me, being surrounded by Marta Roberti’s drawings on carbon-paper feels as if that very magic is being brought back to reality, a summoning into images those written words that at the time I couldn’t understand but only depict in my mind through an endless array of projections of parallel, dreamlike worlds.